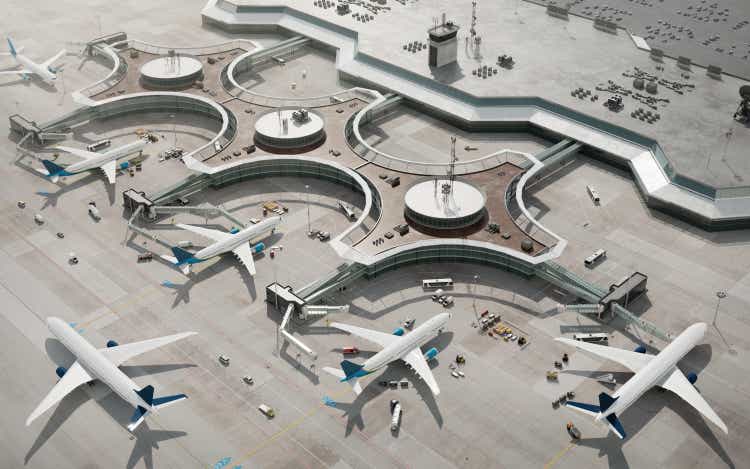 In the previous earnings season, airlines were quite optimistic about their performance in the second quarter. This optimistic outlook took another step forward as airlines revised their expectations upwards. My main concern with airlines has always been that even if the outlook is good there is always something keeping prices down and although i have been criticized for this view it seems that with rising fears of recession and inflation things don’t look good for airline stocks, even when they are currently performing well.

In this report, I will examine how Sun Country Airlines (NASDAQ: SNCY) performed during the first quarter and the outlook and updates provided by the airline for the second quarter and 2022, as applicable.

Revenue was up 78% year-on-year, driven by increased passenger numbers and primarily driven by growth in the scheduled services segment. The increase in operating revenues was supported by a 36% increase in base fares. However, the $98 million increase in revenue did not translate into an increase in operating profit, as expenses increased by $102 million, representing a 99% increase in costs. Part of that was due to a 25% increase in block hours, but soaring fuel prices also play a big role. A rough calculation shows that about $26 million of the $40.27 million increase in jet fuel costs is related to higher jet fuel prices. In addition, payroll support last year reduced cost expense by $26.9 million. These two components already account for about two-thirds of the cost increase. During the quarter, aircraft rents decreased by 43%, due to Sun Country Airlines’ transition from operating leases where the aircraft must be returned to the lessor by the end of the lease to where the aircraft is owned by the airline by the end of the lease term. Thus, over time, the airline transforms cash items into non-cash items.

Excluding payroll support, Sun Country Airlines would see profits increase by $23.8 million, or about 10% as a percentage of revenue. So we saw a significant improvement on an adjusted basis and we see that Sun Country Airlines was profitable in the first quarter of last year as well as this year.

Three-year comparisons, which are used to quantify recovery to pre-pandemic levels, are somewhat less effective for Sun Country Airlines, as the airline has added cargo services to its portfolio, but total revenue per seat- available mile decreased by 1% on lower fares. Excluding freight services, revenues still increased by $9 million. Total fares were approximately $144.2 per passenger in 2019, compared to $183 in the first quarter of 2022.

With a 30% increase in block hours, a more useful metric since Sun Country Airlines also operates a cargo business, the hybrid low-cost carrier was able to cut costs by 6%. What I like about Sun Country Airlines is the combination of scheduled services, cargo flights and charter flights. The latter two provide some stability as they are partially insulated from economic shocks with long-term contracts, a recurring set of customers regardless of the economic downturn, and fuel costs are passed on to customers. Obviously, for the cargo industry, an economic downturn leads to lower demand for e-commerce shipping, but Sun Country Airlines is well protected by long-term contracts. The element isn’t entirely true, but there are still long-term contracts (six years with two two-year extension options) in place that insulate the company somewhat.

My main concern with Sun Country Airlines is that it is operating 30% more block hours compared to the same quarter in 2019 and for the second quarter its revenues are expected to increase by 24% to 30%. This will lead to margins of 5% to 9%, which is a reduction from the 10% margin in the second quarter of 2019 and the first quarter of 2022. So there is a strong increase in demand for air travel, but that won’t translate to net results at all. For a company that achieved 10% adjusted margins this quarter, this is disappointing. It’s not unrealistic, but certainly not the kind of thing you want to see in a market where airlines dictate prices. In addition, the economic cost of fuel per gallon is a monitoring element. For the second quarter, the hybrid carrier expects fuel prices of $3.50 per gallon, but the IATA Monitor shows fuel prices in North America of $4.20 per gallon, which is down from the previous month. So I’m somewhat cautious about the accuracy of the cost environment forecast and haven’t seen the carrier provide details of fuel coverage policies. At the high end, rates will increase, supported by ancillary revenues that are expected to rise from $49 to $60 in the longer term.

One thing that I missed or felt was not discussed in detail was how the crew challenges are handled in terms of hiring and training people. Sun Country Airlines has increased pilot compensation and this is currently putting pressure on margins, but in the longer term it will attract pilots and also improve margins on increased contracts when contract pricing exceeds the rate increase pilot compensation. So Sun Country Airlines did something to become more attractive to pilots, but I think that didn’t describe how they go from hiring to training to having skilled workers.

More worryingly, Sun Country Airlines says it will pick and fly to high-yield markets amid crew shortages and the current fare environment. Indeed, if you don’t have the personnel to fly the plane, there’s not much you can do and flying at a loss doesn’t seem at all appealing. However, the mere fact of not flying also means that the use is not optimal. In the first quarter, charter block hours fell 14.3% as Sun Country Airlines prioritized scheduled services due to crew shortages. At the same time, there are charters which allow the airline to deal with higher fuel costs. Thus, crew shortages do not allow the airline to optimally benefit from segments of the business that are insulated from the jet fuel price environment, which is disappointing.

I like Sun Country Airlines’ establishment of cargo charters and scheduled services and think it allows the company to deploy assets based on demand and provides some stability due to the nature different from each of the segments. However, I do not see the prioritization of flying in certain segments as a lasting solution to the pilot supply problem. The company has increased pilot salaries, which should make the hiring process easier, but I think with the decline in charter flights, which provide some of the business where high fuel prices may just be passed on, the company makes the most of its available staff, but not the best given the nature of intermediary businesses.

Additionally, I find the Q2 2022 forecast disappointing. Fares are expected to be at record highs and many airlines expect that regardless of the fuel price environment, margins will be strong, but Sun Country Airlines led a disappointing quarter in my opinion. This could be partly because the airline was already profitable in previous quarters, but also because the company is changing its cost structure where pilots are paid more and planes are owned or leased. The big question is whether the demand environment remains as robust as it is today and whether Sun Country Airlines can grow its fleet and staff to turn growth into profits. The airline has a lot of potential, but is also dependent on scaling up operations to unlock further benefits of scale, as the current demand and cost environment is not what will unlock this potential.