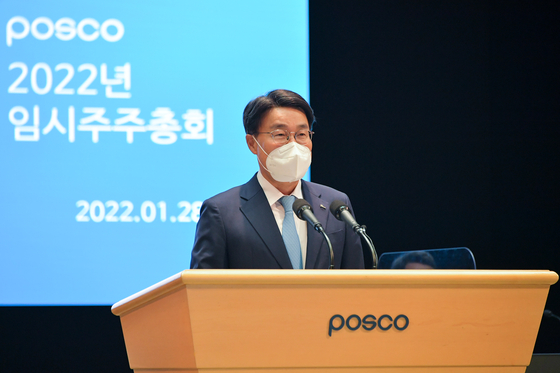 Posco Chairman Choi Jeong-woo speaks at an extraordinary meeting of shareholders held Friday at the Posco Center in Gangnam district, south of Seoul. Posco got the go-ahead from shareholders to become a holding company. [POSCO]

Posco shareholders agreed on Friday to form Posco Holdings, which will own the steel business, other existing businesses and any new businesses created in the future.

The Pohang, North Gyeongsang-based company said 89.2% of shareholders who attended an extraordinary shareholder meeting on Friday approved the move. The National Pension Service – with 9.75% of the shares, the main shareholder – voted “yes” in favor of the transformation.

The formation of a holding company will allow the expansion of non-steel activities and the search for future materials, argued Posco.

Posco Holdings will be established on March 3 and will be headquartered in Gangnam, Seoul. The steelmaker will be called Posco.

Posco’s existing stakes in Posco Chemical, Posco International and Posco Energy, listed on KRX, will be transferred to the holding company.

The company is Korea’s largest steel producer and the world’s sixth largest in terms of steel production. More than half of its sales come from the steel industry.

Posco’s move came as its stock price was in the doldrums despite strong results.

“Although Posco has achieved a lot in the past four years, the market capitalization is less than half of its peak, which was in 2007,” Posco Chairman Choi Jeong-woo said during the briefing. shareholders’ meeting. “The transition to a holding company is essential to increase the value of the group and to continue its growth in this rapidly changing business environment.”

Posco reported consolidated net profit of 7.2 trillion won ($5.9 billion) in 2021, up 302.4%, the company said in its regulatory filing on Friday, in line with market consensus compiled by FnGuide. .

Consolidated results include those of its subsidiaries, a list that includes Posco International, Posco E&C, Posco Energy and Posco Chemical.

Earnings were strong due to the favorable global steel market, the company said.

Residents of Pohang, numbering about 250 members of civic groups, Pohang City Council and North Gyeongsang Provincial Council, staged a protest on Friday morning outside the Posco Center building in the south’s Gangnam district. of Seoul, where the shareholders’ meeting was held, opposing the company’s plan. to become a holding company.

On Thursday, a group of Pohang politicians, including Pohang Mayor Lee Kang-deok and North Gyeongsang Provincial Governor Lee Cheol-woo, released a statement saying the company’s plan would “against the balanced development of the country” and urging the “headquarters of the holding company to be located in the provinces”, and not in Seoul.

“Posco Group’s growth was only possible when people in North Gyeongsang went through difficult times such as environmental issues with the company over the past 50 years,” the statement said. “Posco should come up with specific details and measures on how the transition will lead to mutual growth for the company and residents.”

“Posco Holdings and its Future Technology Research Center should be located in the province, not in the greater Seoul area.”

In response to this, Posco Chairman Choi said that “since Posco’s head office is located in Pohang, it pays all taxes to the city”, so the location of the holding company “will not be not a big problem.”