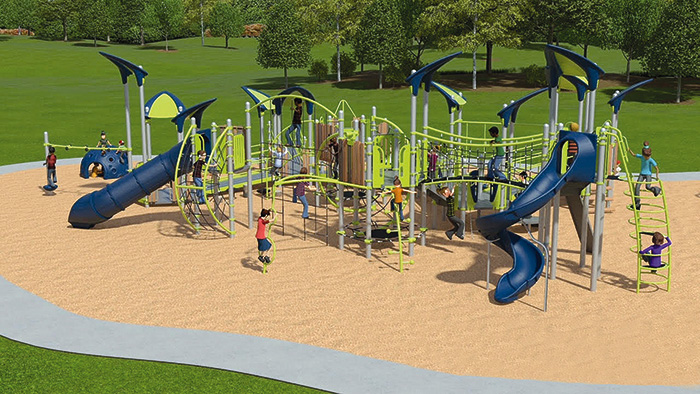 GROSSE POINTE FARMS — Thanks to a $150,000 partnership with the Grosse Pointe Farms Foundation, the farms will build a new and improved play structure at the entrance to Pier Park in the fall.

“The playground that’s there now is over 25 years old,” said parks and recreation manager Chris Galatis. “He’s starting to fail in a lot of areas. The wooden poles (are) failing and deteriorating at the bottom (and) some of the play equipment has (by) its useful life.

Residents can look forward to one last summer of the current gaming landscape. Construction of the new green and blue structure — as well as an Oodle swing, Curva Spinner and cozy dome — is expected to begin just after Labor Day and take about two weeks to complete.

The contract with Penchura LLC, for a maximum amount of $311,209, covers the removal of previous playground equipment, the installation of ground cover and new equipment, and site improvement work. landscaping, including replacing any bushes that may be damaged in the process.

“With the very generous contribution of the Grosse Pointe Farms Foundation, this playground will cost about $500 a month for the next 25 years,” Councilman Neil Sroka said of the town’s expenses. “So it’s a very profitable way to spend that money, given how well we know this playground is being used.”

Rather than going the route of poured-in-place ground cover, which was used in the recent redesign of the City of Grosse Pointe’s Rotary Tot Lot, the structure will feature engineered wood fiber chips. The decision was made because the cast-in-place materials were nearly double the cost, Galatis said, and would need quick replacement because they wouldn’t last the expected 25 years of the new structure.

“People should know that there was a lot of thought that went into the decision to use engineered wood as the base,” Sroka noted.

After choosing Penchura over two other companies, city officials held meetings with the foundation, the parks and harbor committee, and the public to share their opinions and feedback on the projects.

“We’re kind of dealing with everything that’s going on in the world today,” Galatis told the board during the Monday, April 11 meeting. the project (order form) was sent to them on April 15th, so we felt we were at the point that it was a great playground. We think this is a project that will last for years and years to come, which residents will appreciate.

“Part of the project is also to improve the lot a bit,” added Councilman Joe Ricci. “…It’s not in the budget plan, but it’s in the plan for the foundation to step up and improve this at our expense.”