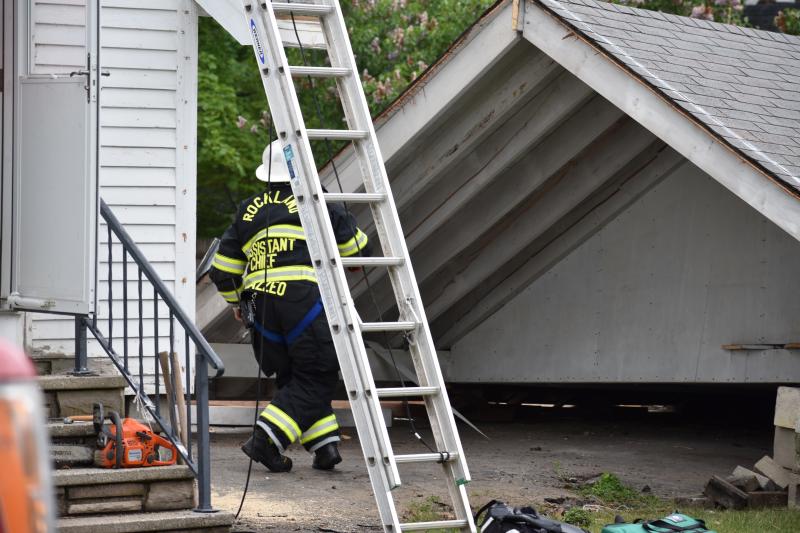 ROCKLAND — A construction worker was airlifted to a trauma center after being trapped under the roof of a carport Saturday morning in Rockland.

As Rockland Fire, EMS and police worked to free the man from under the collapsed structure, emotions were extremely fragile among passers-by who, moments earlier, had heard a loud boom coming from 52 Crescent Street on June 4 2022.

At the time of the incident, the car port was being demolished by a small construction company. While responders were still en route to the scene, on-site workers who made the initial 9-1-1 call reported that a co-worker was trapped under a garage, according to Rockland Fire Chief Chris Whytock, in a press release. Initial reports said the man was still conscious and alert, but by the time the first Rockland police officer arrived at 8:25 a.m. the patient was no longer conscious.

Firefighters lifted a corner of the structure using their Paratech airbag system to lift the weight of the patient’s roof to gain access to its location. They also enlisted the help of Jake Barbour Inc, who made themselves and their earthmoving equipment available.

“Our staff were able to lift and stabilize the structure in order to recover the victim and began emergency rescue measures,” Whytock said.

The victim was eventually transported to Penobscot Bay Medical Center. At this time, no further updates on the patient’s condition are available.

Whytock thanks the construction workers for their prompt notification to the Knox County Regional Communications Center. Their quick action “enabled our duty personnel to be quickly brought to the scene and supplemented by our duty and Appeal Division personnel.”

Eight members of the RFD intervened on the spot (on duty and off duty), five others intervened from their homes to cover the city.