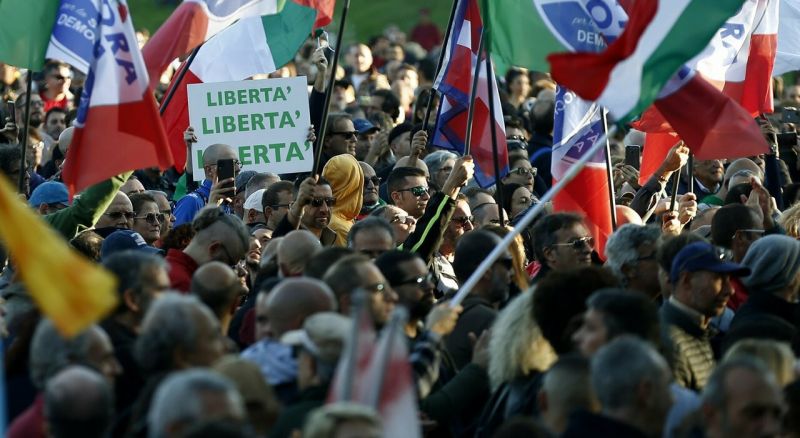 Calls to move Green Pass events away from Circus Maximus.

A prominent Italian journalist and the owner of a bar were attacked and threatened by protesters during a rally against the Italian covid Green Pass in Rome on Saturday afternoon.

Selvaggia Lucarelli was reporting among the 4,000 maskless people gathered in Circus Maximus, filming the predominantly hostile encounters, slurs and No Vax conspiracy theories on her phone.

Lucarelli was ordered to leave on several occasions and at one point he was surrounded by a crowd chanting “giornalist terrorist(Terrorist journalist), favorite mockery of the No Vax and No Green Pass movement.

Hostility peaked when a man butted Lucarelli’s phone, an act that was widely condemned, with the full pictures released by the Rome-based newspaper Domani.

There were also tense scenes at bar 075 across from Circus Maximus where a group of protesters refused requests from staff to wear masks or show a Green Pass, with the certificate proving the holder has been vaccinated, tested negative. or recovered from covid-19.

The situation escalated into threats of violence against bar owner Isabella Massaccesi before the rapid intervention of plainclothes police.

Massaccesi told ANSA news agency a protester pulled his pants down to “make vulgar gestures” towards him, in what she described as a “serious act” amid a wave of violence. “senseless and unnecessary aggressions”.

However, she said she would not file a formal complaint with the police because there are so many incidents that she “would end up having to report 20 or 30 cases a day”.

“The impression I have is that they are playing the big against the little ones” – Massaccesi told ANSA – “We are the little ones, we restaurateurs, and we must be respected because we must enforce certain rules. “

Images from the weekend, however, have led to calls for future “No Green Pass” gatherings to be moved to other locations.

Lorenza Bonaccorsi, president of the Municipio I central area of ​​Rome, asked to meet with the city’s prefect to discuss the protests moving elsewhere, telling SkyTG24 that it was “no longer possible to tolerate situations” like that of Saturday “in the middle of the archaeological area.”

“It’s a public square. She doesn’t belong to a bunch of illiterate and violent boors” – wrote Calenda on Twitter – “They attacked a journalist and a bar clerk. Enough. Send them to protest in a space open outside the ring road. “

From ‘The Nutcracker’ to Scrooge – it’s time for the holiday show!