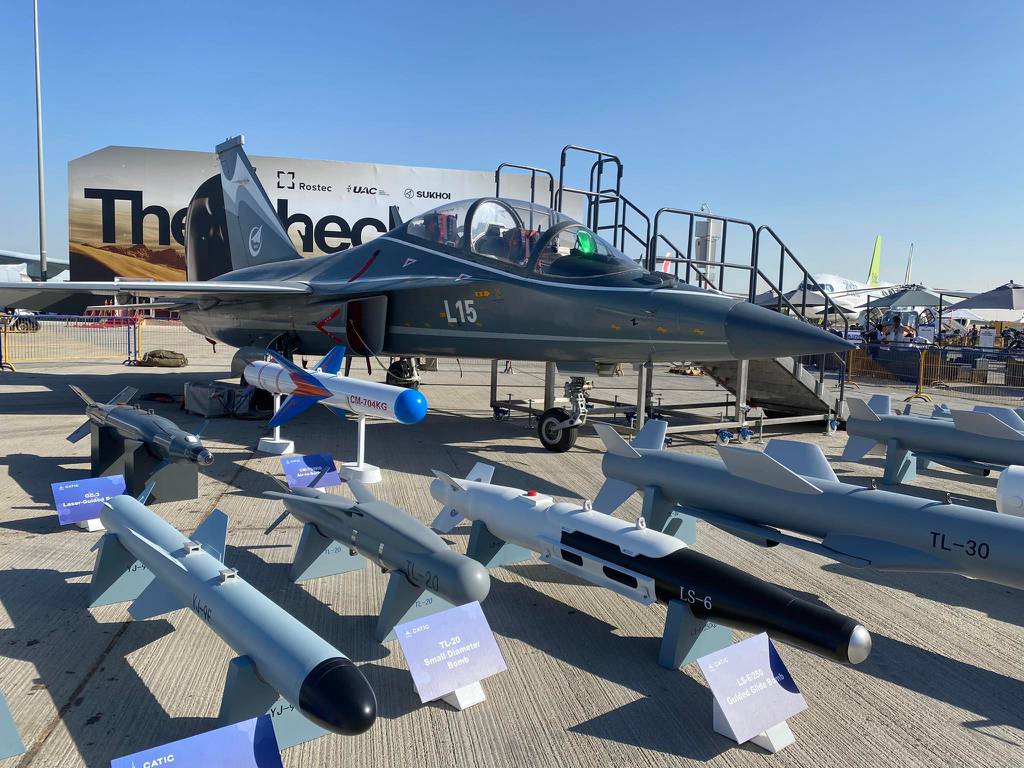 DUBAI, United Arab Emirates – The first Dubai airshow since the start of the coronavirus pandemic has ended. The event, which ran from November 14-18, was dominated by unmanned systems, particularly combat drones.

The Russian company Kronshtadt presented its Orion drone with the available armaments. Emirati defense conglomerate Edge Group has unveiled its QX-5 drone for intelligence, surveillance and reconnaissance missions, as well as the QX-6 cargo drone and Reach-S drone for reconnaissance and transport. And Saudi Arabia’s Advanced Electronics Company introduced the Bariq, a vertical take-off and landing drone with swarm capabilities and ISR technology.

The American firms Kaman Corporation and Fortem Technologies respectively presented a prototype of the Kargo logistics drone and a drone intended to perform counter-drone missions.

While the show is dedicated to both commercial and defense aircraft, this year’s edition seemed to lean heavily towards the former. Still, Defense News noticed a significant number of light attack aircraft at the show: the United Arab Emirates-based Calidus showcased the B-350 with full armament and the B-250 experimental aircraft; Embraer had his A-29 Super Tucano; and Textron brought the Beechcraft AT-6 Wolverine.

In a glitzy presentation featuring laser lights, Rostec showcased its Su-57 Checkmate, which the Russian company classifies as a fifth-generation fighter jet. It was the first time that the aircraft was on display outside of Russia.

For its part, China had a solid performance but without major announcements. In particular, he brought the L-15 supersonic trainer and its available armament. State-owned defense company China National Aero-Technology Import and Export Corporation – better known as CATIC – showcased a range of anti-aircraft missiles, munitions and fighter jets.

More than 100 U.S. companies exhibited at the air show, including defense giants Lockheed Martin and Raytheon Technologies, though they also didn’t make any major announcements. At the 2019 Dubai Airshow, the United States presented an F-22 Raptor on static display. This year he brought a prototype of the F-35 Joint Strike Fighter.

“I think the problem is this is the first air show in two years after COVID, so everyone is sort of speeding up at different times. What we are seeing here is a great commitment from the United States in terms of business and not just military platforms, but American military leadership that has been here, ”said Eric Fanning, chief of the Aerospace Industries Association, at Defense News.

Meanwhile, Brazilian President Jair Bolsonaro walked the tarmac in front of the booth of Brazilian aerospace company Embraer, inspecting the interior of a massive C-390 Millennium transport plane, smiling and waving to crowds of reporters.

French Minister of the Armed Forces Florence Parly inspected the range of helicopters and maritime patrol planes at the Airbus pavilion, surrounded by French airmen in uniform.

Israel had a flag for the first time at the air show, in direct application of the Abrahamic accords. State-owned Israel Aerospace Industries presented a range of manned and unmanned naval and aerial drones.

Rafael Advanced Defense Systems from Israel showcased its Drone Dome, which detects and destroys drones with lasers. Emirati defense officials were seen asking questions about the scope and weight of the Israeli flag’s anti-drone system. A total of six Israeli companies participated in the event.

Aya Batrawy and Isabel Debre of The Associated Press contributed to this report.

Agnès Helou is the Middle East correspondent for Defense News. His interests include missile defense, cybersecurity, interoperability of weapons systems, and strategic issues in the Middle East and Gulf region.