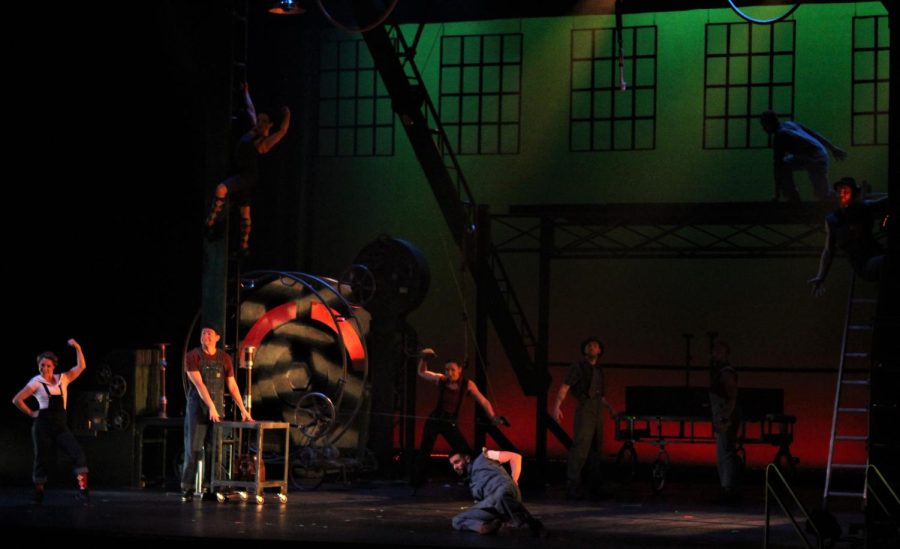 Circus performers told a non-verbal story of resilience and adaptability at the Laxson Auditorium on October 22. The plot of Cirque Mechanics’ “Birdhouse Factory” centers on mundane work that turns into beauty.

Fun for all ages, the comedic pantomime prompted audiences to interact with the performers in response to recognizable cues such as facial expressions, character archetypes, and body language.

A factory boss threw layers of wine glasses over the cigar in his mouth. A hilarious dancer captured the hearts and laughs of the crowd as he flipped through jazz, live performances and classical music on an antique radio. The opening piano riff of Britney Spears’ “Hit Me Baby (One More Time)” weaved its way through the alternation of static and oldies – a fun and fleeting surprise.

Inspired by Charlie Chaplin’s ‘Modern Times’ (1936), the plot is set in a 1920s factory. Cirque Mechanics founder and creative director Chris Lashua said they were aiming for a whimsical performance against a dark backdrop. and bleak, as Chaplin did. The industrial theme of the whole allows a beautiful presentation of the mechanics.

Lashua said the show is a “story of workers losing interest in working for men,” with a message about doing what you love.

A bird enters the factory and injures itself, sparking the interest of jaded workers. They invest more in the welfare of the bird and less in their own work. The story ends when workers leave factory work to build nesting boxes.

Prior to Cirque Mechanics, Lashua toured with Cirque du Soleil after one of the founders discovered him in China while he was a BMX stuntman. He created Birdhouse Factory in 2004 and the show ran until 2014. Two and a half years ago, he planned his comeback before he was delayed by COVID-19 until recently, making Chico the third stage of the tour show.

“It’s really great to be back in front of the audience,” said Lashua.

Lashua created his signature German wheel contraption, the centerpiece of Birdhouse Factory, while he was at Cirque du Soleil. The German wheel is a performance hoop that spins on the floor as gymnasts hang from the center by grabbing onto bars.

Known as the “chariot,” Lashua’s craft consists of a German wheel resting on a set of rollers, allowing performers to spin in place. During the show, the platform acted as a rotating stage animated by unicyclists to better showcase talents like contortions.

“We’re trying to find a way to solve these circus challenges – how to make people fly in the air, how to catch them safely – and build devices that can do that in an interesting way,” Lashua said.

He attached a winch to the German wheel so that an artist could generate enough energy to lift an acrobat using connected cables, making this device a versatile job. He has no engineering background other than taking bikes apart and rebuilding them in “awesome ways.”

He sketches ideas and consults engineers for concepts such as gear ratios and mathematical formulas. The company needs engineers for complex ideas like using torque applied body weight to balance mechanical demands. For financial and security considerations, they validate each calculation before construction. They also consider each step to be different.

“We design a show to fit in a box, and we bring that box everywhere,” Lashua said.

The show has an inspiring message about assessing your position in life and whether or not you want to be there.

An Inside Higher Ed article showed that nearly half of the 2,000 students surveyed have changed their minds about their educational or career path because of COVID-19.

“I think that’s one of the fun things about COVID,” Lashua said. “I don’t care how old you are, what you’ve done or where you are in life. Most of us at some point during COVID were scratching our heads and thinking, “Wow, do I wanna do? Am I happy to do this? ‘ This is what is happening in this factory.

Shae Pastrana can be reached at [email protected] and @Pineyfolk on Twitter.