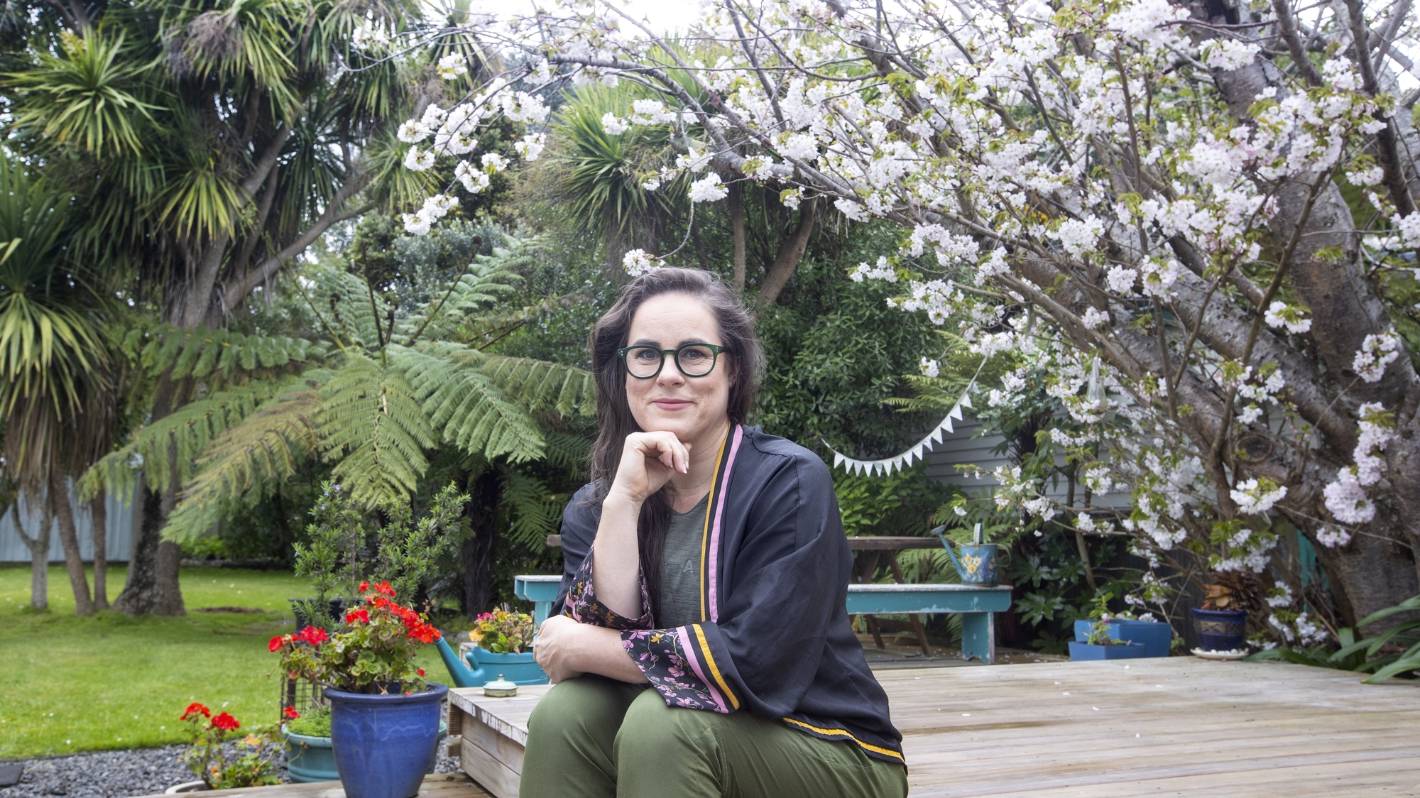 Choreographer Malia Johnston in her garden in Alicetown, Wellington.

Malia Johnston’s career as a dancer, choreographer and director spanned decades and included major roles on shows such as World of Wearable Art. She is currently conducting Belle, an aerial performance which will be presented at the Festival of the Arts next year. Malia lives and gardens in Lower Hutt with her husband Guy Ryan.

I grew up in rural towns on the South Island, places like Otirā, Clandeboye, Hinds and North Loburn. So it was my childhood, living in the middle of nowhere with no access to anything.

We lived and ate the earth. We used to take carrots straight out of the garden, wash them under the hose, soak them in salt and eat them. Delicious.

My dance started in the living room with the records of my parents, Stuff from the ’60s and’ 70s. My mother was a double bass player in the orchestras of the local towns. My father was a teacher and he owned a lot of disguises and a unicycle. So I had access to creativity.

When I was 12, I started dancing lessons. I was quite late to start and had to catch up. I didn’t do ballet (I only entered my first ballet class when I was 23 and it was horrible). I took what was then called jazz, or ballet jazz, and that meant dancing to Wham! and the Pet Shop Boys. I wasn’t pushed in by mom and dad. I really had to force them to let me go, because you had to leave school early to get the bus into town – which was Ashburton.

I opened my own dance school in Christchurch when I was 18. My school consisted of taking all the children rejected from dance schools. I just wanted the kids to dance, I didn’t care about the exam. I was interested in doing the shows. We used to rent the Repertory Theater. I had a lot of parents on the PBO [domestic purposes benefit] who couldn’t pay me. It was a diverse and passionate group of kids and parents and we had a blast. I was also doing a science degree at the University of Canterbury.

You have this idea that you have to go to college. I tried environmental science because I wanted to save whales – all that stuff. Dancing was something I absolutely loved, but I didn’t understand that being an artist was a career. I ran a school, which I didn’t even know was a business. And next to it, I was trying to do the science thing. Then I found out that you could study dance in Auckland. I just left Christchurch and got into it.

I cried for two weeks. I didn’t know anyone in Auckland and it was a huge change. But that quickly changed. It was exactly what I had always dreamed of. I was so excited to go to class. You find your tribe.

I just have a blind passion for what I do. It’s not a frontal lobe exercise to figure out what I need to do to have this career. A career in the arts is a snowball. As you go, you collect the experience, the people, and the data. The momentum. You just have to be screwed in it.

Soon after my husband Guy and I got together we started a company and created a show that turned out. We’ve played it over 70 times, just the two of us. It was about the terrain of the body and the politics of nature against man – many people saw it as a loving duo. We performed it in a handmade space designed for an audience of 14 – an intimate and miniature environment. The music was on a record player, so everything was very analog and vulnerable. It was cool, a real adventure, we went everywhere in a van – even Stewart Island – and we met a lot of people on the road. You have to face each other, you are really face to face. Fights? Sure!

As an artist, you feel like you’re out of place when it comes to buying a home. We had cut back on the concept for a while, saving our pennies. We finally bought in 2014, just before the market got mental. Only Guy and I live here, but we have a lot of artists who stay when they perform so we own a lot of mattresses.

I didn’t think I was a gardener until I got a plot and it starts to flow. I plant like I do a job. I put things in there and I say “look what happens!” And then I look for him afterwards.

The garden was neglected and a bit shabby. Some parts looked dead, then you put plants in them and you realize you like to sit in them. We don’t have kids, but we have nieces, nephews, and friends with kids and you really notice how drawn they are to playing in different roles depending on how inviting they are.

I love to cook, so planting herbs was one of the first things I did. I have all the herbs to make Asian dishes: lime makrut, lemongrass, peppers. It’s so cool to go out in the garden and pick flowers and vegetables. It’s my favorite thing.

I enjoyed the acrobatic component of the dance. I’ve been on the ropes, I love it. I met the whole aerial circus community when I moved to Wellington. Jenny ritchie [the choreographer on Belle] is one of New Zealand’s top spinners. She designed new devices for Belle. We have dancers and aerials that combine and it’s been an entirely creative process to look at what we can do with these bodies.

Belle – a Performance of Air is slated to be part of the New Zealand Aotearoa Festival of the Arts in Wellington from February through March next year.

Things to do in Cincinnati this week: October 25-31