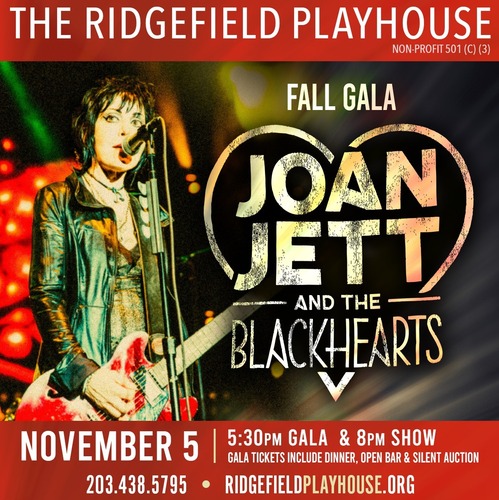 Joan Jett and the Blackhearts headline the Playhouse Fall Gala, a handful of tickets left!

After the year, we all had time to fundraise for the arts and let off steam with the Ridgefield Playhouse Fall Gala featuring original rock visionary – Joan Jett. As the frontman of the hard-rock Blackhearts, with whom she became inducted into the Rock and Roll Hall of Fame, she had eight platinum and gold albums and nine Top 40 singles, including the classics “Bad Reputation”, “I Love Rock ‘N’ Roll,” “I hate myself for loving you” and “Crimson and Clover,” to name a few.

His independent label, Blackheart, was founded in 1980 after being rejected by no less than 23 labels. Blackheart is one of the oldest independent labels and continues to give voice to new groups. As a producer, she oversaw the albums of Bikini Kill, Circus Lupus, as well as Germs LA’s punk masterpiece, GI. Jett’s music has become a permanent force in the mainstream culture. Jett and the Blackhearts continue to tour the world with titles alongside other rock icons like The Who, Green Day and the Foo Fighters. Additionally, Jett has acted and appeared in films, television, and the theater.

Jett also got to see his story told in The Runaways, the feature film based on his first group, with Kristen Stewart as Jett and Dakota Fanning as Cherie Currie. Jett was close to the project, as an executive producer. Bad Reputation, a documentary about Jett’s life, premiered by critics at the 2018 Sundance Film Festival. The film continues to receive praise and accolades and is available on all streaming platforms. Not bad for a woman whose first music teacher told her girls can’t rock and roll!

Upgrade to a gala ticket and join us before the show for an open bar, select wine and spirits tastings, and bite-size dinner at various restaurants and caterers in the area. The evening also includes one-of-a-kind auction items.