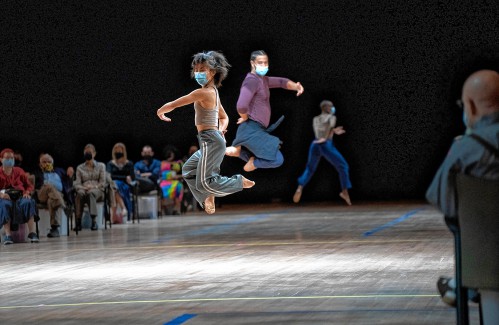 The Fine Arts Center at the University of Massachusetts, like so many art venues during the pandemic, had to resort to online productions from early spring 2020. Planning for the 2020-2021 season is already well underway , had to be scrapped and reconfigured for a distant audience, recalls FAC Director Jamilla Deria.

But while COVID-19 is still hanging around, the FAC is once again hosting live performances, with dance, music, theater / circus performances and more on the program. A highlight this month is a two-day appearance by the Bill T. Jones / Arnie Zane Dance Company, which will present a new work, “Afterwardness,” which itself has been shaped by the pandemic.

A few online presentations are part of the mix for this fall, but the focus is on re-engaging audiences live, according to Deria and Michael Sakamoto, associate director of programming for the FAC. The initial focus is on smaller, more intimate shows, in some cases with limited seating, with larger events on the schedule later this year and early 2022.

“The idea has been to make the season easier, both for ourselves and for the public,” said Deria. “We need to be resilient, work on social distancing when planning our shows, and recognize that not everyone is comfortable being part of an audience.”

Sakamoto notes that planning for the new season, which began in the spring, also had to take into account the uncertainty among the artists themselves as to whether they would be on tour in the fall.

“Not everyone was ready to start traveling again,” he said. “We anticipate more of a return in 2022 to the type of programming that we have had in the past. “

In recognition of COVID, some FAC shows will be presented by soloists or small ensembles. For example, the violinist Jennifer Koh, who made her orchestral debut at the age of 11, will perform a solo recital on October 28 at the Bowker Auditorium featuring Bach masterpieces and new commissions from great Asian American composers .

Sakamoto says that Koh’s “Bach and Beyond” series, in which she traces the history of the solo violin repertoire of Bach’s Six Sonatas and Partitas to the work of 20th and 21st century composers, “is really quite extraordinary … it’s is kind of a musical dialogue. “

Deria notes that FCC staff have also learned a lot over the past year about presenting virtual shows – 75 events were held, attracting 26,000 spectators – and they will use this experience to make online presentations a regular game. seasons to come. The center is acquiring cameras and other equipment to simultaneously broadcast some live shows in person, she says, “We know virtual shows are here to stay. It’s another way to stay connected to our audience.

For now, however, the focus is on live events. Here’s a look at some of the highlights of the fall.

Celebrate Pearl Primus, Bowker Auditorium, October 14 at 7 p.m. – This tribute is paid to the famous 20th-century dancer and choreographer who was one of the first performers to introduce African dance to American audiences – and to argue that it was of a vital art form with a rich cultural heritage.

Originally from Trinidad, Primus (1919–1994) spent much of her life in New York City, but also played at Jacob’s Pillow in Becket and lived in the valley in the 1980s when she taught ethnic studies at UMass.

In Jones’ case, it’s a reference to the work he and his company have developed while dealing with the forced isolation of the pandemic, as well as the emotional upheaval of high-profile cases of police violence against black men. in 2020 – what Kyle Maude, the company’s production manager, calls “twin pandemics”.

Maude says the dancers in the company were asked to create “sound diaries” about their daily experiences during this time, about “isolation at home, trying to dance in their 4 x 4 kitchen” , or their roofs or their bed. The dancers were also awarded solos “from the 40-year history of the company,” Maude said in an email. “And the ‘aftermath’ started to take shape.”

The company resumed working in person last fall at the Park Avenue Armory in New York City, with everyone wearing face masks and undergoing regular COVID testing; they debuted the show this spring. At the FAC, the nine dancers in the production will continue to wear masks for most of the performance and will not touch each other, Maude said.

The New York Times calls a dance program that is very topical “Afterwardness”: “It feels authentic, and beyond that, resolute in refusing to paint the bad snapshot of an era…. Even in the most spirited of passages, there is a sense of isolation and exhaustion as tired and courageous bodies move in and out of vacant spaces and paths, demarcated by blue and yellow tape on a stage of 55,000. square feet.

Seating for FAC shows – just the second performance of “Afterwardness” – will be limited to 170 people. “It’s a very intimate performance,” says Deria.

Martha Redbone Roots Project, Bowker Auditorium, Nov. 9 at 7:30 p.m. – Redbone, a part-Native American and part-black singer and songwriter, is known for “her unique folk, blues and gospel gumbo” which is taken from her childhood in Kentucky and “pre-gentrified Brooklyn eclectic grain,” as the program notes put it. It will be supported by a small ensemble.

Christian Sables, Randolph W. Bromery Center for the Arts Concert Hall, Nov. 18 at 7:30 p.m. – Sands, originally from Connecticut and considered one of the world’s finest young jazz pianists and composers, was also artist in residence at UMass . With his small ensemble, he will play extracts from his most recent album, “Be Water”; one of these compositions, “Be Water II”, was nominated for a 2021 Grammy Award.

For more details on the new FAC season, visit umass.edu/Online. Members of the public must be fully immunized or show evidence of a negative COVID test within the past 72 hours; face masks are also mandatory.

Steve Pfarrer can be reached at [email protected]