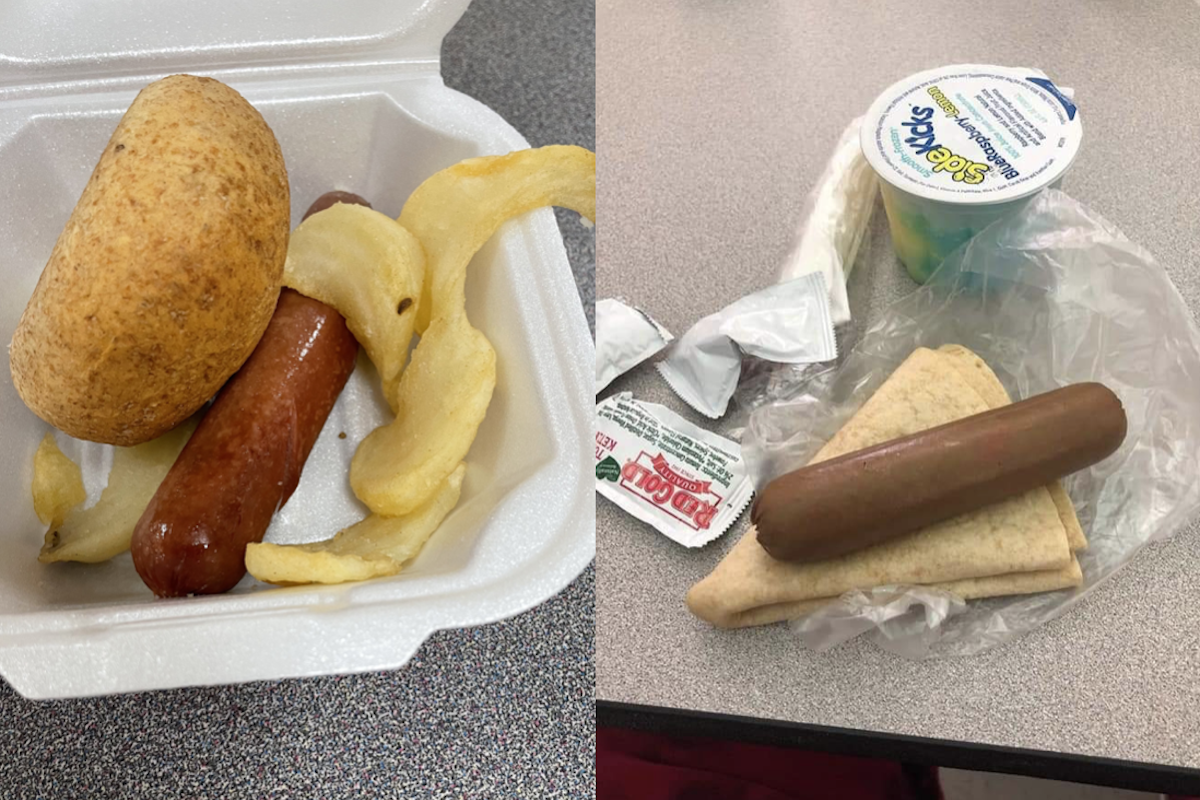 CLARKSVILLE, Tennessee (CLARKSVILLE NOW) – School lunches in Clarksville-Montgomery County have been a bit different lately, with some students only getting a hot dog and tortilla for their midday meal due to national supply chain issues .

The school district said meal changes were out of their control due to national issues affecting their provider. But the resulting menu and the lack of options to deal with it outraged some parents.

A parent at CMCSS, Shavonda Fort, told Clarksville Now that when her high school student showed her a photo of what was served at lunch, she was shocked.

“I thought it was ridiculous, and how it’s served,” Fort said, adding that she was now making lunch for her student. “I told him, ‘No more.'”

Another parent, David Cowger, said he was not aware of the problem until his fifth-grader came home hungry and had only eaten a hot dog this that day.

Even though the meal is not enough for some students, Fort said they are not allowed to buy second portions. Cowger added that their student has been told that he is not allowed to share food with others who may not have the alternate option of a packed lunch.

“There are a lot of kids who have their main meals at school and their parents – it’s sad – but their parents can’t afford sumptuous, sometimes even decent, good meals,” Cowger said.

“I guess they’re saying there’s a food shortage, and that’s their response to all parents who are upset,” he continued. ” But what is ? Because we have tons of restaurants, tons of grocery stores you and I go to, and I haven’t seen anything posted like a broccoli shortage or a beef shortage.

Fort also believes there must be a way around the problem.

“They can’t just use that (supply chain issues) as an excuse because, to me, you have a whole community that I’m sure will support you with your school system and provide you with the things that you. need, ”Fort said.

She added that with crop production going on throughout Montgomery County, it doesn’t make sense that there is such a shortage.

“Why not just educate parents so that we don’t wonder why our kids are coming home hungry? Cowger said.

“Menu selections can be unconventional, such as sides that may not traditionally match entrees, or hamburger or hot dog buns replaced with flatbread or wraps to house the burger meat or hot dog, ”Huff said.

She said these meals still meet federal standards. “Full and USDA approved meals are still served daily at no cost to our students and families,” Huff said.

She added that although the infant nutrition department at CMCSS has existing contracts with vendors dealing with supply issues, they are continually exploring other vendors and options.

“A major problem is that many of our suppliers are not accepting new high volume customers while they are working to supply their existing customers,” Huff continued.

She also touched on some of the parents’ points about groceries and other local food items.

“For some, sourcing might be as easy as going to Kroger if Publix runs out of nothing they need, but the district serves over 150,000 meals a week, so local sourcing is usually not available. not a viable option, ”Huff said.

No Door Dash in local schools

Many students and parents have tried another solution: order delivery to school from Door Dash, Uber Eats, Jimmy John’s and others. The CMCSS said it was not allowed.

“Please note that meal deliveries for students from outside vendors cannot be accepted at the school during school hours,” Wainwright said. “Students can bring lunch from home, get a free lunch at our school cafeteria, or parents / guardians can bring their students’ lunch to reception.”

“With an average of around 1,200 students in our colleges and 1,500 in our high schools, we welcome many third-party deliveries from people who may or may not know the student’s name, grade level, lunchtime, and so on. and may or may not arrive on time presents logistical challenges, ”Johnson said.

“In addition, this practice introduces many non-guardian visitors into the school environment, which presents security concerns,” he said.

Not just the affected breakfasts

Along with the shortage of food for lunch, the district is struggling to secure disposable trays and utensils. So, instead, bagged lunches are offered.

“Why don’t you just use the reusable trays that you can wash instead of the disposable trays? Cowger asked. “That’s what I’ve always grown up with.”

In addition to food issues, the district is struggling to stock up on tech items such as HVAC parts and bus maintenance parts.

“Sourcing computers and computer parts has been a bit difficult for us,” Huff said at Tuesday’s board meeting, adding that CTO David Holman is monitoring the problem.