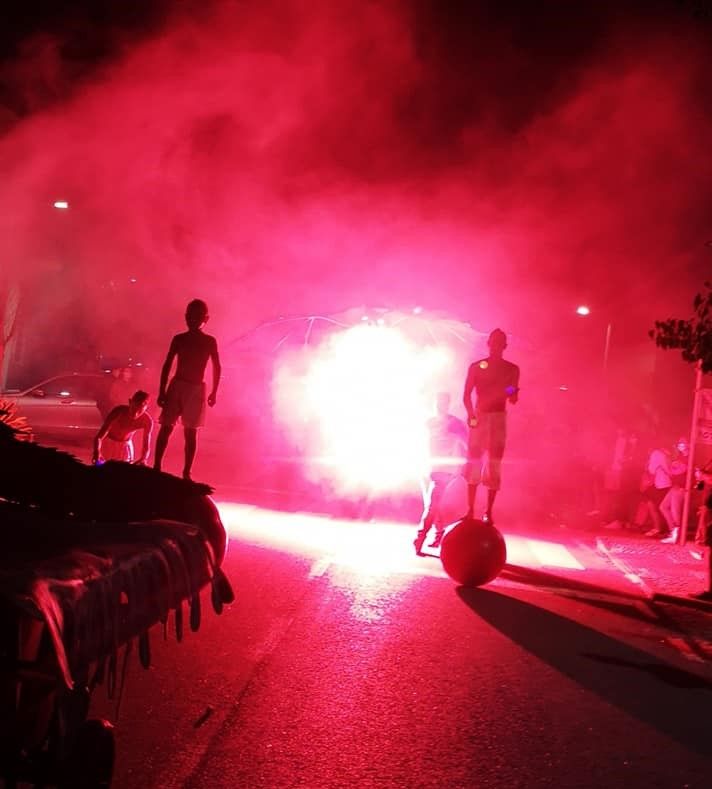 If you’ve ever been to Noite Branca or Festival Med (or even this summer’s InterMEDio) in Loulé, you probably should at some point have made room for a very talented group in the crowd…, let’s call -the “human dragons” because let’s face it, for all intents and purposes, that’s what they are.

With, just to begin with, their ability to breathe fire. And not only that, they juggle, twirl and spin their flames in an incredibly complex and perfect unison. They light up and create a dazzling hell as they dance around each other in a daredevil display of truly fascinating and otherworldly skills.

But not all of these people are on fire. They offer all kinds of other entertainment that helps make these events even more magical. From decorations, like giant puppets to the wide variety of mysterious monsters perched on stilts, navigate the crowded cobblestone streets of the Old Town with apparent ease. (Which is pretty impressive. I mean, I’m no expert, but I’ve heard it’s pretty tough just in high heels…)

The artistic association responsible for all these avant-garde events is called Satori. I’ve always kind of heard of them, but about a week ago they were having a parade on the main road in their hometown of Salir, and I was very kindly invited to go with them.

Arriving in the late afternoon, I got a behind-the-scenes look at all the work involved in making these spectacular, sparkling shows.

The first stop was at their headquarters. This, for anyone who’s ever driven to Salir, is the beautiful graffiti covered building just before the bridge as you drive into town. It wasn’t always there though, and I later found out that when Satori was originally formed (in 1999) his original base was in Querença, in an even more idyllic location just after Ponte from Passagem. The place used to be an old olive oil press which they refitted and used for concerts. However, when a golf development moved in, they had to move. They started again in the nearby town of Salir. Where, in a somewhat cosmic coincidence, they found themselves once again in an old olive oil press next to a beautiful bridge.

The place over the past few weeks has seen a buzz of activity as they created and assembled the various vehicles to prepare for the evening’s festivities. The theme: Algarvensis – Animalist and Nocturne.

After a quick glance, we made our way to the city behind the elementary school which served as a base to put the finishing touches on these “creatures of the night”. There were several tricycles, all with their own unique and very convincing monsters on the roof.

Salamanders, lizards and even a moving “bat” were given their final coat of paint, along with their final checks so they were ready to roll.

Here I met Tiago who I think it would be fair to say is “dragon head”.

I’d of course seen him before, but usually in deep focus as he juggled large fireballs around his head (not the best time to chat). And, even if he wasn’t actually “on fire” himself, he would usually rush to make sure things were safe and things didn’t actually go “up in smoke.”

As usual, he was busy preparing for the night’s animal antics, but he took a minute to sit down and tell me about this artistic association. Tiago has been there from the start and you can tell he’s incredibly passionate. However, he strongly pointed out to me that Satori is taller than any person. It is a symbol. It’s for everyone.

In 2019, they opened the IluminArte (the yellow square opposite the Loulé market). Here children can come after school to learn theater, circus and street art. Satori really helps bring the community together and gives kids with difficult backgrounds, who otherwise might indulge in all kinds of nonsense, the chance to come and channel their energy into learning some really amazing skills and feeling a part of something.

Indeed, it became clear that Tiago really cares about people and what he wanted to emphasize is that the most important thing about the evening was that a girl called Leonor, who was born with problems. cognitive skills, would that evening climb on stilts to lead the parade.

As the darkness descended, all kinds of “Russian” monsters, jesters and even vampires donned their costumes and make-up and began to come out to play. There were even children who, after being covered with a layer of mud, ran to dry themselves before the performance.

The cattle bikes were then taken out and rode up the street to the start line. I helped escort a giant balloon and wondered what it was for, when this little mud covered child (about 10 years old) jumped on it and casually stepped on it as it rolled down the hill, the keeping at a slow and steady pace.

A crowd started to grow and at 9:30 am the show started with Leonor in the lead and Tiago by her side, keeping her focused and in control. The terrifying tricycles followed, their eyes now shining and shining in the darkness. The jesters juggled and played with the crowd, then suddenly there was a BANG and the first rocket set off the show. The little mud monster passed, joined by his (I guess) older brothers who were also on top of their balls. And, as if to say that this balance wasn’t difficult enough, they were juggling too.

Satori is well known, both nationally and internationally. Which is really something, considering they’re based in such a quiet town in the hills. But these “Guerreiros de Arte” (warriors of art) as they call themselves, are fighting to promote art and culture in the Algarve and to put them on the map. To learn more about these blatant flamethrowers, follow them on Facebook at: Associação Artística – Satori