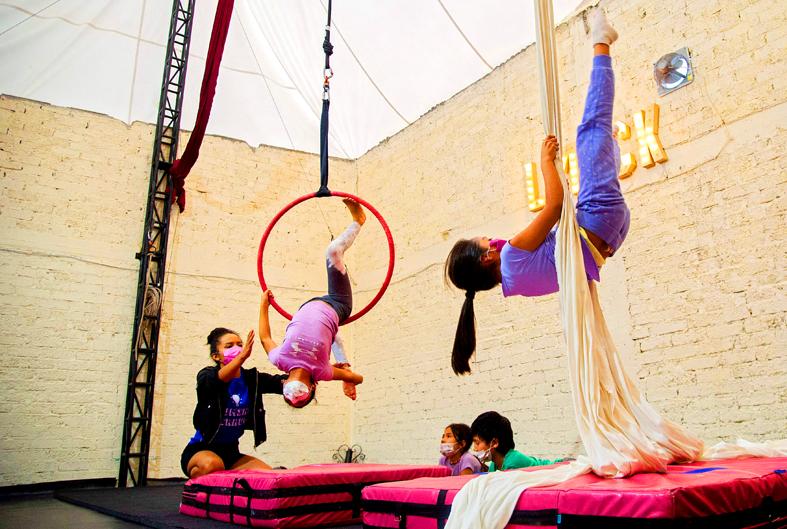 
Children hang from hoops and budding acrobats swing on tightropes or spin in the air at a circus school in Mexico, determined to keep their dreams alive despite the COVID-19 pandemic.

When the virus forced circuses to close last year, a family began looking for a place to practice in a suburb of the hard-hit Mexican capital.

Hoping to one day perform with the internationally renowned Cirque du Soleil troupe, they found a warehouse that they adapted into a gymnasium, where Lumina Cirkum was born.

In no time, their tightrope, unicycles and hoops caught the attention of neighbors and they decided to offer acrobatics lessons to local children.

The classes help keep the 30 students busy during the pandemic and the family paying the rent for the space.

When COVID-19 first spread rapidly across Mexico, shutting down non-essential activities, everything was on hold, said Ana Zavala, who coordinates the project.

It was not clear whether the acrobats would have a job to resume or whether they would have to change careers, said the 44-year-old, whose daughter Karina Cervantes Zavala teaches at school.

“We have decided to pursue the dream and training for resuming work or circus activities,” said Ana Zavala, who shares the aspirations of her 21-year-old daughter since she was a child.

The school is adorned with images of Karina’s performances and colorful posters, one of which shows a walking bear beating a drum. Spotlights and unicycles hang from the ceiling. There is even a popcorn machine.

It looks like a real circus – an activity with a long tradition in Mexico, but which has been brought to its knees since the pandemic arrived over a year ago.

It was not until April that circuses began to reopen with limited capacity due to social distancing measures, in a country with one of the highest known death tolls from COVID-19.

In Lumina Cirkum, masked children arrive and start doing acrobatics even before receiving instructions from their teachers.

“It’s great that the kids are coming to their first class and they’re all happy and want to keep coming back,” said Jairo Avila, a 23-year-old Colombian acrobat and school coach.

The children’s enthusiasm is clear as they contort themselves in the hoops and on the aerial tissues under the supervision of their teachers.

One of the best things about coaching is achieving what seems unattainable, said Ana Zavala’s partner Cristobal Salcedo, a tightrope walker with 20 years of experience.

“You tell people to stand on a rope and it seems like an impossible thing to them, but when you turn a corner near you and you see a guy walking on the rope, you say, ‘If he can, I can too ”he said. “That’s what I love to teach.

Comments will be moderated. Keep comments relevant to the article. Comments containing abusive and obscene language, personal attacks of any kind or promotion will be removed and the user banned. The final decision will be at the discretion of the Taipei Times.