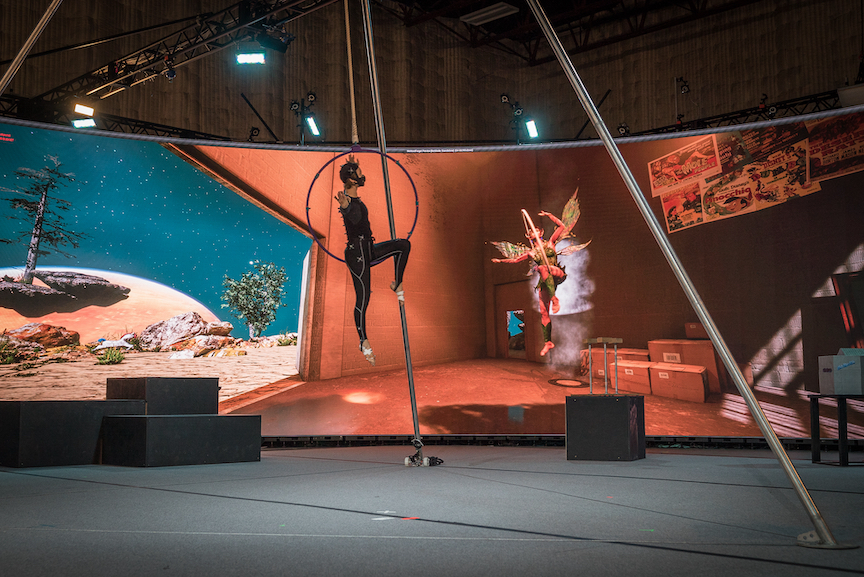 Shocap and the 7 fingers: transforming the circus live with virtual production

Live Design: What is new technology and how does it work?

Athomas Goldberg: Ultimately, we’re trying to find ways to tie multiple new technologies together into one seamless experience. At Animatrik’s studio in Vancouver, we already have access to motion capture equipment, virtual cameras, a giant LED wall and much more. Instead of using just one of these technologies, our next series, LiViCi, is a unique performance that comes to life through the use of mixed reality, combining these technologies with Epic’s Unreal Engine to generate live performances that exist simultaneously in person and in the digital realm.

Samuel Tétreault: The artists of 7 Finger direct the movement of digital characters and animated effects in a fully created interactive virtual world while wearing motion capture suits – something previously reserved for the film and video game industry. It’s a true cross-reality achievement, demonstrating the incredible potential of the Unreal Engine and its ability to improve live productions in new and exciting ways. With an LED wall and other projection surfaces depicting live graphics behind the performers on stage, in-person viewers have access to an expanded reality, shared with remote participants.

AG: In terms of new individual technology, there is a very unique aspect to our LiViCi offering. While still in development, we actively built the Ringmaster Virtual Performance System, a new tool for creating and controlling live shows that connects a range of technological solutions, including motion capture systems, virtual cameras, LED walls and projectors, as well as DMX and OSC under centralized control in real time and although there are a number of other commercial solutions for the production of live events, which makes Ringmaster unique, it’s its ability to simultaneously control virtual lighting, cameras, and effects in connected virtual reality and multiplayer gaming environments, as well.

LD: How will The 7 Fingers integrate this to transform live performances?

ST: From our perspective, we intend to extend the art of performing arts to a wider audience than ever before. To achieve this and reach people in new ways, we need exciting new storytelling tools. With Shocap Entertainment, we are able to expand our arsenal by using technology to create new artistic languages. We don’t just want to present video effects as if they were cheats, we want them to be meaningful and directly serve the story.

AG: The idea is to introduce a synthesis of on-stage acrobatics and computer-generated real-time visual effects where artists interact with their digital counterparts live and on stage. The 7 Fingers are already incredibly talented – it’s not about revolutionizing every central element of their performance, but rather about using technology in a way that uniquely expands what is possible for both acrobats and the television viewers.

LD: Is there also a virtual section for people who cannot attend “live”?

AG: With live virtual performances like LiViCi, we aim to enhance and expand the audience experience, giving remote viewers access to fully unique and interactive perspectives as the audience in-person witnesses an expanded stage experience. Interactive possibilities when viewed virtually include navigating the virtual space of the live event as an avatar using a virtual reality (VR) headset. Virtual reality is one of the most transformative aspects of the LiViCi experience and literally acts as a doorway to a new reality.

ST: In order to reach as large an audience as possible, our performance approach will allow simultaneous viewing of a performance by an on-site audience and remote viewers. The remote performance experience will provide everyone with an element of direct participation. I think this is really important and often missing from other approaches to virtual performance. There is a great opportunity to offer exciting and engaging new forms of virtual interactivity to match the intensity inherent in an in-person event.

LD: What hardware and software are needed?

AG: For each performance there will be an in-person perspective, a cinematic stream via a computer, virtual reality headsets, and an option to enter the show using an avatar like a video game. The latter option could be achieved by using an everyday computer with an internet connection or a VR headset. Each point of view will have its own advantages and ways of interacting and influencing performance, and viewers won’t need high-end gear to view them. Regarding the live broadcast of the performance from our studio, we work in partnership with a number of innovative partners specializing in the facilitation of live virtual performances.

LD: What are the technical staff needs, is that where the partnership comes in?

AG: When introducing new technology and new ways for audiences to connect, there will always be a learning curve, but our goal with Ringmaster and all of our tools is to leverage workflows as much as possible. programs and make the creation and control of programs as intuitive as possible. Our DMX and OSC integration is intended to enable lighting and sound operators to use their existing fixtures and consoles to create and control signals in physical and virtual environments.

Creators of digital content used in stage screenings and online immersive environments will need to be experienced with Unreal Engine and other digital content creation tools, but our tools do not add any additional requirements to this part of the production pipeline. .

This is the real strength of our partnership. Between the deep history of live theatrical circus production of The 7 Fingers and our decades of experience in virtual production and real-time computer graphics, we are able to make the most of this new medium for the live performance and to do so at a level of production values. which we hope will lead audiences to forget about the tech altogether and simply delve into the human life affirming stories, stunning visual art, and incredible death defying performances.

LD: What / what is the first live performance in this vein?

ST: We aim to create the first of our LiViCi Concert Series in early 2022. We have already shared several teasers, conducted a number of workshops and produced a preview performance, including a live demo as a preview to the audience, showcasing the remarkable technological achievements and offering of the project. This is a long term partnership and project and we are still developing all the components necessary for full scale acrobatic performance using Shocap’s mixed reality technology.

AG: The workshops carried out so far have already successfully demonstrated this LiViCi can achieve – we look forward to sharing more over the next year.

These basketball teams did not have an ejection in 2020-21