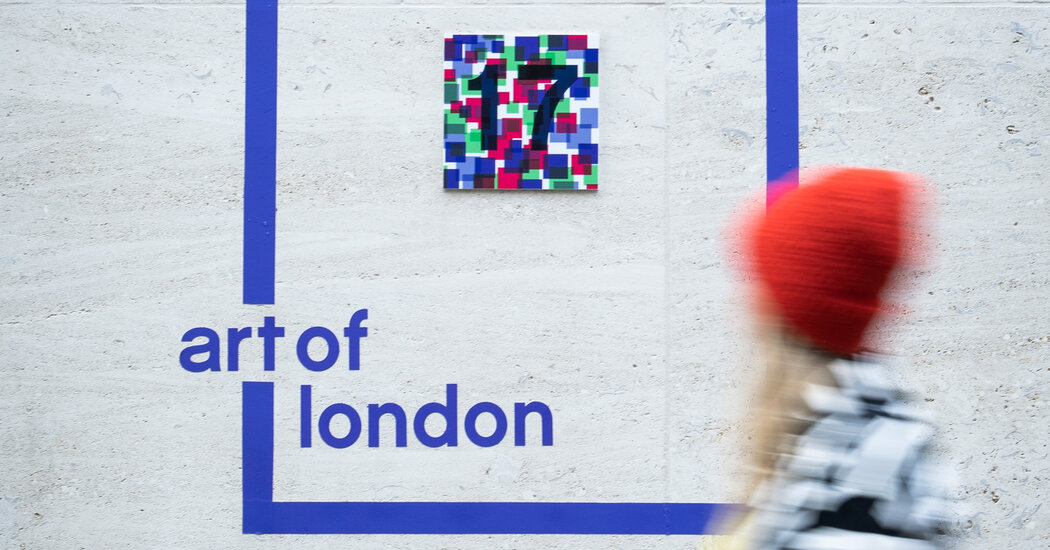 
LONDON – London’s leading art museums are using augmented reality as a way to share works with the public and draw visitors inside, even with coronavirus restrictions moving.

the national gallery associated with National portrait gallery, the Royal Academy of Arts and other organizations to create the Augmented Gallery, an interactive hiking trail accessible by app of 20 historical and contemporary pieces visible by smartphone.

These three museums, along with the British Museum and the Tate, are among those that are open – admitting a reduced number of visitors, who must book tickets in advance to allow for social distancing.

The open-air gallery route stretches through the center of the city, from the west of Piccadilly Circus to the east of Leicester Square, starting at the National Gallery and ending outside the Royal Academy .

By downloading the free app (search for ‘Art of London AR Gallery’ in your favorite app store) and scanning QR codes attached to exterior walls along the way, walkers can see and hear details of paintings at older oil like Anthony van Dyck’s “Equestrian portrait of Charles I” and “Sunflowers” ​​by Vincent van Gogh or more contemporary pieces like that of Tracey Emin acrylic work “Trying to find yourself 1”. Also included are the works of the winners and finalists of the Competition for the Portrait Artist of the Year of the Sky that capture figures like American musician Nile Rodgers in Christabel blackburn or English actress Elaine Paige by Toby Michel.

One recent afternoon on St. Martin’s Lane outside the building that houses the English National Opera, Veronica Marcano pointed her smartphone at a multicolored patterned plaque on a wall, learning more about the so-called “Portrait of Chandos”By Shakespeare, possibly painted from life in the early 1600s by an artist named John Taylor. (The National Portrait Gallery says this is the first portrait it acquired, in 1856.)

Downloading the app and then scanning the codes was no obstacle for Ms Marcano, who had long worked in the software industry in London but “was taking a sabbatical from work to paint,” a- she declared.

“I had walked here and seen these places in several places,” she said. “And today I was like ‘OK, I have to find out what this is because it sounds interesting.’ So I downloaded the app and love it.

Other portraits on the runway are of more contemporary figures like singer Tom Jones by Duncan Shoosmith and Nobel Peace Prize Laureate Malala Yousafzai by Shirin Neshat.

British actor Stephen Mangan, who can be heard on the app discussing Jones’ portrayal, said in a press release that the Augmented Gallery was “such a great initiative that people can safely enjoy it in open air in the heart of London’s West End, and hopefully it presents these timeless classics and contemporary masterpieces to a new audience.

Another famous narrator is British comedian James Acaster, who weighs in on the van Dyck.

The Augmented Gallery is part of a larger initiative to reposition London’s West End as an artistic and cultural destination; the normally busy area was eerily quiet during the city’s darker days of the pandemic. One hope is that people will come to see the art and then stay for a meal or a show.

Another project with similar objectives is “Scenes on the square”, a cinema-themed sculpture trail in and around Leicester Square, home to many great British cinema premieres.

The “scenes” – accompanied by a free audio tour available on Spotify – consist of nine steel, fiberglass and bronze statues of film and television characters scattered across buildings, benches and flowerbeds. flowers.

Among them, Mary Poppins raises her open umbrella; Harry Potter on his Quidditch broom; a strangely realistic Mr. Bean; a Paddington Bear Marmalade Sandwich; a muscular Batman staring down from the roof of a movie theater; and a Wonder Woman wielding a lasso to the side of another building.

Introduced last year, the installation is slated to expand this summer, when a 10th sculpture is added – an empty Iron Throne from the HBO series ‘Game of Thrones’, suitable for selfies.

Yet another way to engage in London’s outdoor art scene is to check out what sits atop a pedestal known as the the fourth plinth, in Trafalgar Square. You can even help decide what will happen next, if you hurry up.

Every few years, the public can vote for the finalists for the public art commission.

The current work is “The End” by the British artist Heather phillipson. Its sculpture resembles a giant spoonful of whipped cream topped with a cherry, a fly and a drone that films passers-by and displays them in real time on the Web. For the first time, the base includes a plate explaining everything in Braille.

Previous works included an oversized ship in a bottle by Anglo-Nigerian artist Yinka Shonibare, in what was considered a commentary on colonialism, and a giant blue rooster by German sculptor Katharina Fritsch which was interpreted as commentary on the male posture. .

Today, artists from Great Britain, Germany, Ghana, Mexico and the United States are competing to get their work on the plinth in 2022 or 2024 on themes such as mistrust, racism, sexuality and ecology. The winners will be chosen by the Fourth Plinth Commissioning Group, made up of artists, curators and journalists, taking into account the public vote.

Models of their proposed works are on display at the National Gallery for free until July 4. You can vote for your favorite online, but be quick – voting ends Sunday.